During the shareholders meeting in November, Liberty Media announced that it would create three tracking stocks for its Liberty Media stock. Liberty has filed its 388 page registration prospectus here

As per this registration document, Liberty Media will have three tracking stocks, Liberty Sirius group, Liberty Braves Group and Liberty Media group. In typical Malone style, each of these stocks will have three series of stocks, A, C and the super voting B shares that will largely be held by John Malone and his insiders. Essentially,  LMCA, LMCB and LMCK will cease to exist and will be replaced by 9 tracking stocks — LSXMA, LSXMB, LSXMK for the Liberty Sirius group; BATRA, BATRB, BATRK for the Liberty Braves group and LMCA, LMCB and LMCK for the remaining Liberty Media group. BATRB and LMCB will trade on OTC and the rest will trade on NASDAQ.

Each shareholder of one Liberty Media common stock will now receive one share of Liberty Sirius group, 0.1 share of Liberty Braves and 0.25 shares of Liberty Media stock. Each shareholder of of Liberty common stock will get new stocks in the corresponding series. For example: LMCA holder will get BATRA, LSXMA and LMCA etc. Furthermore, A series will have one vote per share, B shares will have 10 votes per share and C series of the three families will have no votes unless otherwise required by Delaware law (For Example: Liquidation of the parent Liberty company). Economic exposure will be the same for all three classes. However, there is always a possibility that the B class super voting shares might be taken out at a premium (it exists today as well). No fractional shares will be provided and shareholders will get paid in cash (taxable) in lieu of fractional shares.John Malone will continue to be a 10%+ economic owner with 47.7% of aggregate voting power in the newly formed companies through his B series shares.

In this tracking stock proposal, the holders of the securities can track the performance of the individual segment and can own the stock of the separate segments. However, these are tracking stocks and the shareholders will have no claim over the assets of the tracking stocks and will still be exposed to Liberty Media as a whole. However, the shareholders can mix the proportion of economic exposure they get to the three segments in the event of a buyout of the individual segment. Shareholders will ultimately have to be dependent on the board of directors of Liberty Media to maximize shareholder’s value which John Malone and his lieutenants seems to have a good track record for.

A few key things to keep in mind. Liberty can dispose any of the three groups of stocks (Sirius, Braves or Media stocks) without further shareholder approval. If any of the groups are taken over in a M&A, then under the new charter, the company will either pay a dividend, redeem the common for cash or securities or convert all the existing shares into a different security. Here’s the kicker, if Liberty Media were liquidated as a whole, shareholders of different stocks will get paid on the proportionate ‘liquidation units’  determined by the first twenty days trading prices of the three classes of stocks (Sirius, Braves and Media) If an enterprising investor were to need exposure to the possibility of Liberty Media being liquidated as a whole, post the first 20 days, one can pick the tracking stock that will give the highest exposure.

Liberty Sirius group will have the 60%+ interest in Sirius corporation. In addition, it will have a $250M margin loan secured by Sirius shares and $50M cash and deferred tax liabilities.

Liberty Braves group will have assets attributed with the Atlanta Braves team. It will have $61M in cash and $165M in loans by Braves holdings. Further more, Braves will have a rights offering for $200M allowing shareholders to purchase C class shares at 20% discount to prevailing market price.

Liberty Media group will own 34% in Live Nation, $420M after tax proceeds from Vivendi settlement, some public securities in Time Warner, Viacom etc, $50M in cash and 1.375% cash convertible senior notes due 2023 of $1B with the relevant warrant and bond hedges. It will also own a 20% interest in Liberty Braves.

Below are the attributable Assets, Income and Cash Flows to the three units as of Sep 30, 2015. 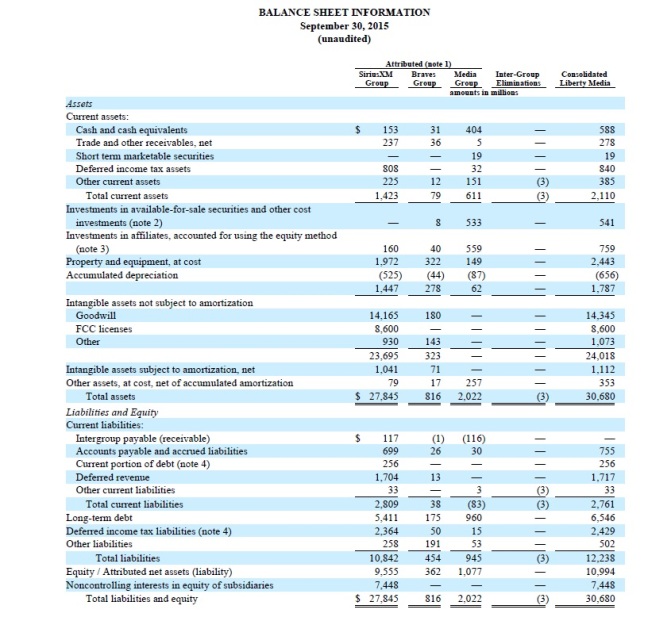 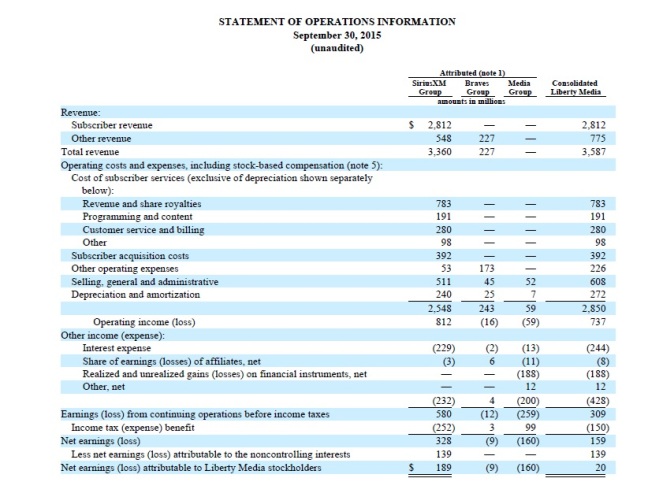 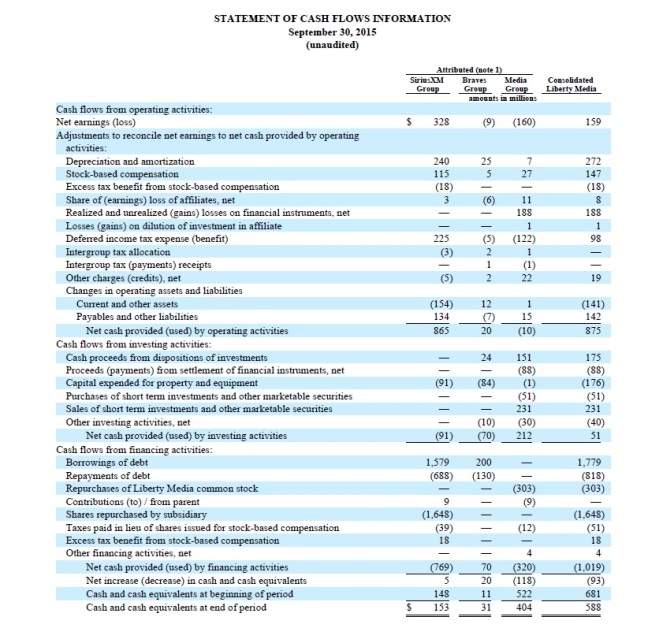 All these complexity comes at a cost. Tracking units are not standalone entities. If Liberty Media were to be liquidated as a whole company, your exposure and proceeds may not be necessarily connected with the attributed assets and liabilities. Even while owning a single family of tracking stocks, an investor might be exposed to the risks associated with the whole company or risk associated with a different family of tracking stock. Liberty is trying to unlock the complexity discount, ‘Liberty might overpay for Sirius’ discount and the sum of the parts discount that the stock holds today and it is not very clear how this will help reduce those concerns. However, it will give a deeper insight into the functioning and returns at a more granular level. Liberty’s contention is that tracking stocks would reduce the sum-of-the-parts being lesser than the whole discount remains to be seen.